Ten Disgusting And Abominable Foods That I Will Not Eat

Like most of you, I enjoy eating. Sometimes, I overeat (especially at buffets), but most days, I enjoy healthy relatively modest portions. But although I love the popular TV show “Bizarre Foods” hosted by Andrew Zimmern, I rarely put anything in my mouth that is moving, slimy, or smells worse than four-day old turkey breast.

Disgusting foods are for other people, not me. However, because they are gaining in popularity, here’s a Top-10 List that I won’t touch with a 100-foot pole. Enjoy these scrumptious delicacies  and tell me all about them. But please…don’t send pictures.

Balut I’m guessing that 99% of our readers never heard of this. Consider yourself fortunate. Balut is a duck egg that contains a recognizable embryo. That’s right. You can actually see the legs and other gruesome things. A carcass of a duck fetus is staring you in the face, which makes it even more difficult to eat.

Longer incubation periods result in more vivid features of the duck.  It’s mostly found in Asia, and despite the large amount of protein, I couldn’t fathom ever eating one, even if it was a matter of life and death!

Casu marzu No, it’s not a professional basketball team in Italy. It’s actually rotten cheese. And it gets worse. This decomposed cheese contains live moving squishy larvae to make the experience truly unique. But here’s the trick. If the maggots in the cheese are alive, it’s safe to eat. If they are dead, it’s unsafe. To me, it makes no difference whether they are dead or alive.

I’m not eating it. Ever! In fact, I may have lost my appetite for all types of cheese. If you can’t pronounce the food you’re eating, then don’t eat it! And any cheese that looks like it doesn’t belong on a pizza should be avoided.

Tripe. Actually, it doesn’t sound too bad, but it is. Tripe is the edible portion of the stomach from assorted animals, such as cows and pigs. It comes in two forms. When unwashed, it has an awful smell and contains undigested food that the animal may have eaten. Often, in this form, it is used for pet food. It also can be washed and boiled which removes some of the odor. But the taste doesn’t improve much and the popularity of this food is declining. Rightfully so. 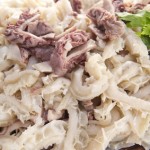 Bull’s testicles  Actually, testicles from any animal makes my list. For obvious reasons, I don’t think I need to go into great detail regarding why. Oddly, the texture (when cooked) isn’t bad, and when cooked in the right sauce, the taste may be somewhat palatable. But just knowing that I am eating that  specific body part…well…I would rather have a root canal. Maybe even five root canals.

Lutefisk Mostly found in Scandinavia and surrounding areas, it is a whitefish that has been dried with lye and other unusual ingredients. It’s prepared by drenching in water for approximately 7-10 days. It tends to easily fall apart and has a spoiled smell that must be masked when cooking. It can be prepared with pepper or melted butter and you may occasionally see this dish pop up in Minnesota. Don’t count on seeing this on many menus. And if you do see it, order something else.

Eggs Wait a minute! Eggs? There must be some type of mistake. Sheepishly, I must admit that I (just me) hate eggs. I can’t ever remember liking them, although I have been told that I liked hard boiled eggs in junior high school. I realize that many foods contain eggs as an ingredient, but that doesn’t change my feelings about them. In fact, when my wife is baking, I always ask, “Are there eggs in that recipe?” She usually always says no. I don’t believe her.

Monkey brains I don’t think I have to elaborate much here. Actually, any brain would be horrifying to eat. And believe it or not, in some cultures, the raw brain is consumed. Even if eating them makes you smarter (bad joke), I won’t do it. Another good reason is that consuming this type of food may be hazardous to your health. And this is despite the fact that brains are one of Andrew Zimmern’s favorite delicacies.

Pacha It doesn’t sound too threatening, does it? Maybe a game for kids or a light coat for adverse weather? Well…Try again. It’s a dish in Iraq that consists of one major ingredient. A sheep’s head. Sometimes the stomach accompanies this dish to make it more tasty. And the liquid used to cook the head is also part of this scrumptious meal. Rice and onions are also served. I assume to kill the taste! Note: Apparently there is also a nightclub franchise with the same name. I assume they are not related. 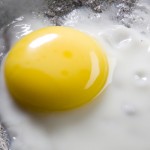 The lasagna from my junior high school in Pa  Yes, it’s been more than 40 years ago. And yes, most other classmates liked it. But I have never forgotten the taste, even though I only took two bites. I never should have taken that second bite. Or the first. Oddly, I don’t mind lasagna today, although I try not to think back to adolescence when I’m eating it. By the way, the chicken pot pie in junior high school, was excellent. The pizza, although obviously not freshly-made, was also very tasty.

Chicha It’s a corn beer that ferments for 2-4 days. It’s mostly consumed in South America and often used for specific rituals or religious ceremonies. It contains a little bit of alcohol and looks like apple cider. OK. That’s not so bad…so far. But here’s the kicker. In certain societies, the person preparing this homemade fermented drink will pre chew it and form small patties before the drying process begins. Would you like your food pre- chewed? I didn’t think so!